Simply, we can’t apply appropriate corrective actions if the problem is not clearly identified. Those who do not learn from mistakes are doomed to repeat them.

Check out our articles on What is FOD or How to Set Up a FOD Program for more great ideas.

Historically, 70-75% of FOD events are classified as “cause unknown” which is a mistake. The source of impact damage to an aircraft or engine can be determined in almost every instance with some detective work. This article addresses the issues of FOD investigation and is based on the author’s experience in successfully investigating more than 1,800 FOD-related events using forensic data in connection with the physical damage.

Causes of FOD can be grouped into the following categories:

With proper categorization, it is much easier to allocate resources to address the source of the problem.

The Elements of FOD Investigation

What procedures should be followed if an event has occurred and an investigation is required? Organizational procedures vary. However, procedures should intrude minimally on the organization’s mission. It is important to return the aircraft to its operational status as quickly as possible.

The overall goal of investigating a FOD event is to learn what happened and establish appropriate actions based on lessons learned to prevent a recurrence. The level and depth of the investigation varies from organization to organization, and also from event to event in different circumstances.

The Steps of FOD Investigation

You may have seen the television series, CSI, in which forensic pathologists conduct criminal investigations. The attention to details and the careful process of deduction is fascinating. FOD investigation is similarly challenging, and we describe the following examples with great detail to give you a feeling for how the data is gathered and conclusions are reached.

In this actual example, sparks were observed coming from an engine during start-up. The engine was quickly shut down before it had fully spooled. The damage was severe enough to require an engine change. The investigation starts with documentation, both written and photographic/video.

What were the circumstances of the event? Where/when was the damage discovered? Did the flight/maintenance crews notice any problems? What is the recent maintenance history?

Digital photo & video documentation, a very important part of the investigation process, will include an overview of the damage as well as detailed views of individual impacts. 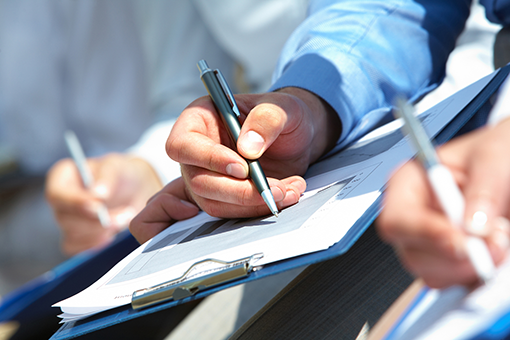 In the example, we know that the event occurred at engine start-up. The engine was shut down before the compressor became fully spooled, so fan speed rotation did not reach its maximum. The engine damage was reported to be isolated to the fan and fan booster, with only minor damage aft of the first stage fan blades. The general damage characteristics are shown in Figures 1-4.

While there is no LE (Leading Edge) damage to any inlet strut, there is extensive LE blade damage to all first stage fan blades, Figures 1 and 2.

The acoustic liner also shows extensive damage. The damage can be described as exhibiting rotational symmetry. In general, the blades have LE jagged edges from the blade tip and extending to inside the mid- span shroud, with blades bent in the direction opposite to engine rotation (this engine rotates counterclockwise as viewed from the front).

Rotational damage symmetry occurs on the fan of this engine when an object is caught on the TE (Trailing Edge) of an inlet strut. As the fan rotates, each fan blade strikes the intruding object in the same way, thus giving the damage a similar appearance from blade to blade.

Could a blade break and cause the damage? Indeed, there is a portion of airfoil missing, as shown in Figure 5.

However, several blades incurred hits that are different from those described so far. Smooth circular-shaped impacts are shown on two different blades in Figures 6 and 7. This damage could not have been the result of the liberated airfoil, as the airfoil edge is not circular. These circular impacts are the result of a foreign object.

The impacts have the same approximate diameter, which reflects the diameter of a portion of the impacting object. The object is obviously hard and ductile, because repeat impacts resulted in the same damage geom- etry. Only a hard ductile object can sustain multiple blade impacts and still retain its approximate original shape. Therefore, subsequent impacts will be by an object with same original geometry.

How is there so much damage to the first stage, but little downstream damage, and the core is untouched? The answer is that the impacting object was too large to pass through the open spaces between blades. For the object to pass through them the blades had to break, creating a larger space or the impacting object had to break into smaller projectiles.

Also, the fact that the engine shows rotational damage symmetry indicates that the object was at least as wide as the spacing between the TE of the inlet strut and the LE of the first-stage fan.

Did the object enter through the intake or was it in the engine at startup? Inspecting photos of the damage, we see that the blades look as if they were hit on the backside, that is, the LE concave surface.

Consider the following: when there is sufficient airflow through the engine, the foreign object will be picked up by the airflow. The inlet guide vanes direct the airflow toward the first-stage blades. As long as the object is smaller than the spacing between the inlet struts, there will be no LE inlet strut damage.

The object, now in the gas path, will try to pass through to stage two. However, as the rotor rotates, the LE backside of the blade strikes the object.

[You can convince yourself of this by doing the following: While standing in front of an engine with the engine not running, try passing a pencil from the first stage to the second stage and rotate the rotor counterclockwise (the direction of engine rotation of this particular engine) with your finger. You will see how the LE concave side of the blade strikes the pencil.]

This is exactly what happened in the subject engine. Stated another way, the blade strikes the foreign object as it tries to pass through between stages rather than the object striking the blade.

Let’s summarize what we have learned from the physical damage characteristics:

We know that the foreign object is fairly large and hard, but we do not know what the object actually is. If we end the investigation at this point, the FOD would fall into the category of a hard object that entered through the intake.

Is this useful information for FOD Prevention? If so, what steps would you recommend to your organization to prevent a recurrence of this type? Providing a specific recommendation for prevention is difficult without identifying the object itself.

The next step in the investigation is evaluation of the forensic evidence. Whenever there is impact deformation to an airplane component, be it the fuselage, horizontal stabilizer, or engine components, the impacting object will leave a little bit of itself behind in the impact area. This is easy to visualize when you think of a fender bender between a white car and red car. There is an exchange of paints between the two cars, and you can see it.

There is also an exchange of materials on airplanes, but generally the debris is not readily visible. Instead it is present in the form of small microscopic particles. The particulate matter can be analyzed. The fact that airplane material (think airplane DNA) is different from commercial use material allows the source of damage to be identified.

Failure Analysis Service Technology, Inc. (FAST) has brought this technology to the user, with the development of a procedure that allows the user to sample the damage using a special tape. The tape samples, known as FAST samples, remove the particulate matter, which can then be analyzed. The procedure allows component parts, if repairable, to be returned to service. Repair is not delayed by the investigation.

The forensic evidence coupled with the physical damage suggests a fairly large tool. A portion of the tool is circular with the same diameter as that of the circular-shaped impacts shown in Figures 6 and 7.

This information was reported to the organization using this engine. It was also reported that the object was probably thrown through the fan bypass duct. A search was made on a dirt road about 100 yards aft of the area where this event occurred. Acoustic liner material, Figure 8, blade fragments, Figure 9, and a portion of a crescent wrench, Figure 10, were found.

By using the process described, we have gone from damage unknown to impact by a hard object that entered through the intake, to a tool, and finally, to impact by the claw of a crescent wrench.

This example also illustrates the general characteristics of damage sustained by an engine when impacted by a hard ductile object.